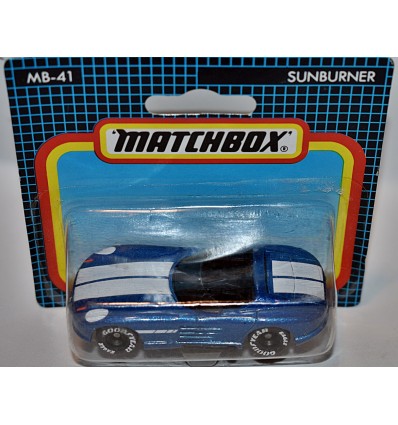 This is the beautiful Sunburner from Matchbox.

Collectors Note: The Sunburner has become one of the rarest Matchbox castings ever produced, with only three versions ever made (Yellow, Blue and a White Sunburner that was part of a 1992 Sams Club Holiday Set). Here is the story as told to us by a former MB Executive during a club dinner.

When Dodge unveiled the Viper concpt car in 1989, Matchbox tried to license the car to be the first one to produce a toy Viper. Dodge denied the request, so Matchbox issued the Viper look alike "Sunburner" casting in 1992 & 1993. Dodge apparently was not happy and they forced MB to stop making the car if they wanted to license the production Viper in 1994.

So, that is why there are only 3 versions of this casting, and you'll likely never see another produced. The story is hear-say, but it did come from a MB Exec that was part of that story.

This one is on a rare Matchbox Short Card, so it is a very collectible piece of Matchbox history!

It is a great cross-collectible so if you collect MOPAR, Vipers, or Matchbox this is a unique piece for your collection. (1:64 Scale)