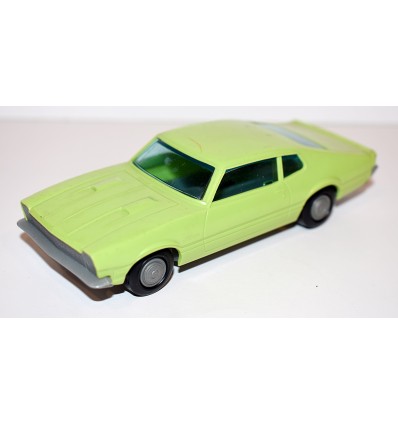 Funmates' most well-known offering was a series of Ford vehicles sealed in plastic on the sides of Proctor & Gamble detergent packages for 1971 and 1972 (The Accelerator, 2008). They were marketed as "Go Cars" and had a spring loaded handle with a three inch long narrow metal rod that slipped into a hole in the back of the car. When not in use the handle could be stored in another hole to the back right of the bumper. The handle was molded in the same color as the car. The car shot across the floor when a small black lever was depressed. Some of the cars were made with a launching "pad" mechanism that the car rested on top of.

These cars were produced in about 1:40 scale (they were 5 inches long) and included Ford Torinos (in 1971 and 1972 body styles), a Ford Mustang Mach 1, a Maverick, a Thunderbird, a Mercury Cougar, and a Mercury Montego. They were molded in polystyrene plastic and came in light lime green, orange, yellow, beige, white and a dark maroon red. They appeared almost to be smaller versions of American promotional models, though the orange and maroon colors of plastic were not so opaque in appearance like in traditional 1:25 scale promotional models. It was curious that there were no dark greens or blues in the color offerings. The cars had very accurate proportions and good detail. Chassis were molded in a silver gray as were wheels. Tires were a hard black plastic. Because of the launching mechanism there were no interiors.

This is the light green Maverick, and it is beautiful. The car is completely intact, the only thing missing is the little launcher. Since these came in laundry detergent most them ended up in the hands of kids and were destroyed. However, they are so well made, that the survivors are usually in good condition. If you collect Ford, Mavericks, rare Promo’s, or Funmate this a chance to add a very unique piece to your collection. (1:40 Scale)

10 other products in the same category: