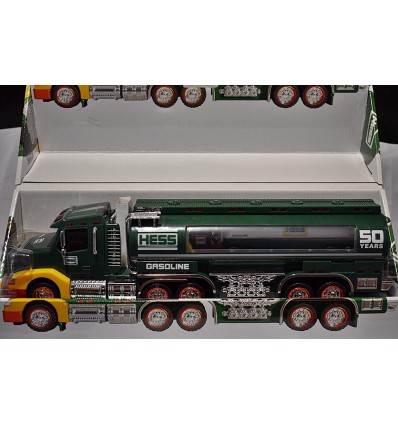 This is a great find. It is the special 50th Anniversary edition of the Hess Trucks. This was not the 2014 gas station model. It features a Hess mini tanker inside the Big Tank!  This picture is the first time its eve been out of the box, it is beautiful!

Hess celebrated 50 years of Hess Toy Trucks with a nod to where it all began, issuing the first ever two-tankers-in-one. The larger tanker melds the early Hess Truck color pallet with contemporary accents and angles. This elegant, modernized tanker features 92 lights, the most ever on a Hess toy, including 27 super-bright LEDs. The high wattage serves to showcase the special cargo inside the window paneled tank-trailer – a smaller replica of the original 1964 Hess Tanker Trailer, complete with a flexible hose and 16 more lights. The individually numbered Collector’s Edition toy truck was packaged in a custom-designed, keepsake, lift-to-open display box and an outer protective sleeve.

15 other products in the same category: