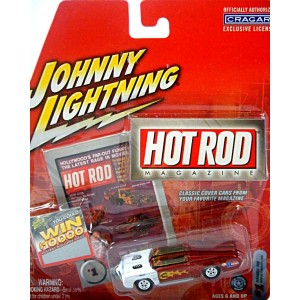 Collectors Note: There are several variations of this car becuase it appeared in four different JL series. This version is distinguishable to the Hot Rod Magazine by the blackwall tires. The other variations either had redline tires, or white lettered tires. It was release over a decade ago in 2004.

It is a great cross-collectible so if you collect Johnny Lightning, or MOPAR this will be a wonderful addition to your collection. (1:64 Scale)

17 other products in the same category: