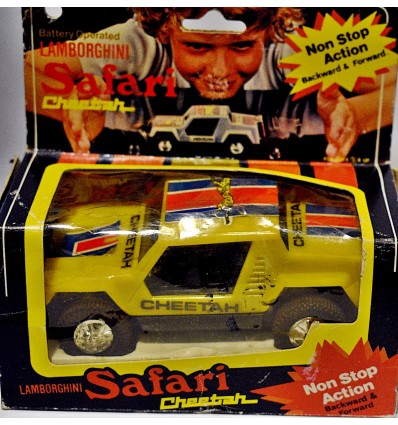 The Lamborghini Cheetah was first debuted at the Geneva Auto Show in 1977. It was conceived of a chassis built in San Jose California, a Chrysler engine, and the body and finishing touches done by Lamborghini. They were built for the military, but AM General won the contract with the HummVee. When that occurred the only prototype ever built stayed with Lamborghini, and the Cheetah project died.

This is the only known toy version of the Lambo Cheetah that we are aware of. These are very hard to find, particularly in its original packaging! The only time this has ever been removed from the box was for these photos, it is absolutely beautiful!

It is approx 1:32 Scale, and if you collect Lamborghini or Kei Hing than this is a must have for your collection!