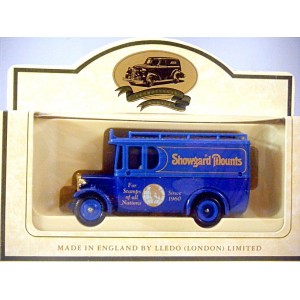 Vidiforms is a NY based company that makes Showgard Mounts for stamp collectors. Beginning in 1985, they commissioned to series of Lledo Promotional Models to promote their Stamp Mount products.

This is the 1932 Dennis Delivery Truck with the Showgard Mounts graphics and it comes in a Lledo Promotional Box. The baseplate states “Lledo Promotional Model. If you collect Lledo, Dennis, or Showgard Promo’s this is a great addition for your collection. This is one of the first ten Series 1 models. (Approx 1:50-1:43 Scale)

24 other products in the same category: