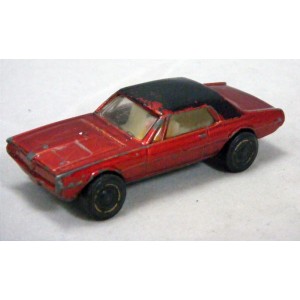 This product is no longer in stock

This is a beautiful Mercury Cougar from Marx.

Collectors Note: This was the first time that Marx had decided to produce 1:64 Scale Vehicles, in an effort to compete with Matchbox and Hot Wheels. They were produced in 1969, and were only made for two years. They were marketed with “Super Speed Wheels”, and came in a plastic bag. Some had interiors with a driver, some had just a white floor, no other interior. They also had “Champion Grade” versions, that were packaged on a blistercard, or in a rare Super Speed Car box. They even had a track called an “Instant Speedway”, in an attempt to compete with Hot Wheels. There are only a handful of castings, and they have become quite rare, and don’t often make to the collector market these days.

This is the first time in 8 years we have had a few of these to offer for sale. This Red Metallic Mercury Cougar is a hard one to find. It is in near mint condition. It is hard to describe just how rare these cars are, we have never had this particular variation in our ten years + of dealing in vintage diecast. We have priced below its book value, as a thank you to our customers.  If you collect Mercury, Cougars this is an amazing find for your collection as you may not see another one for many, many years!

24 other products in the same category: